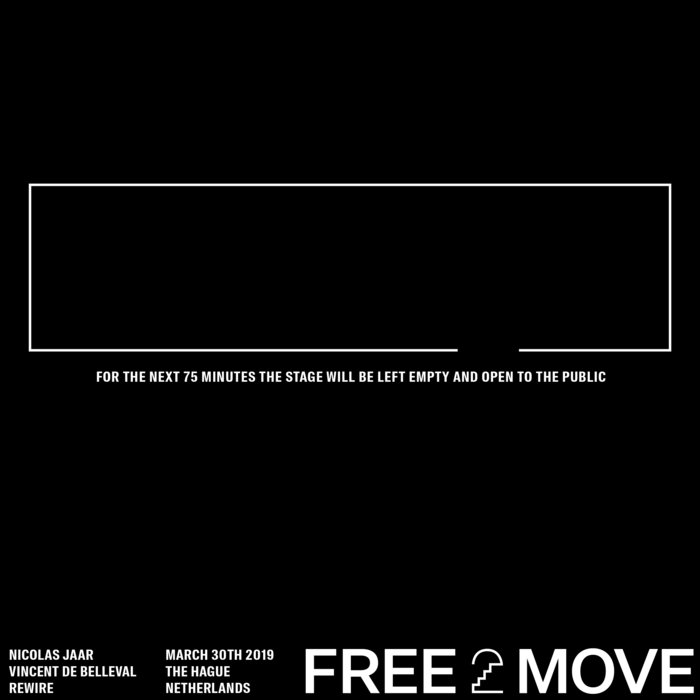 Arturo thank you Nico for this amazing experience, one of the best gigs of my life. hopefully we can do this agan soon.

In the second edition of a new series of recordings unearthed by Rewire, we highlight Chilean artist Nicolás Jaar and his collaboration with spatial designer and artist Vincent de Belleval entitled ‘Free 2 Move’, which was specially conceived for Rewire 2019.

As a pay-what-you-want release, Nicolás would like any proceeds from donations to fully benefit his collaborators on this project.

About ‘Free 2 Move’:
At Rewire 2019, Nicolás Jaar & Vincent de Belleval premiered a new show that aimed to question the borders of performance. ‘Free 2 Move’ was built around de Belleval’s interactive light installation and a dj set by Nicolás Jaar. With the stage left completely empty, the audience were left free to explore the space, with the lights then lowered from the ceiling. Throughout the show the audience began to interact with the installation, quickly realising that the lights were linked to Jaar’s synths. The performance became a collaboration and conversation between performer and audience, and at one point Jaar stopped playing completely, letting the audience control the music with their movement and interaction, composing in real-time. Sonically, the performance sees Nicolás Jaar explore recent iterations of his club-oriented work, including his Against All Logic alias. The set opens with a relentless industrial sound palette, with buzz-saw synths punctuated by crunching metal. Jaar navigates his way through varied drum patterns with effortless eclecticism, unafraid to draw from a wide range of club subgenres. Washes of tape saturation build tension as the performance becomes increasingly hypnotic, with vocal loops and brash digital distortion charged by bellowing club peaks. The listener is offered momentary respite from the freneticism as an evocative trance synth sweeps over, drawing audible cheers from the dancing audience, before manipulated vocals and clanging percussion return for a final charge of unbridled energy.

This performance was specially commissioned for Rewire Festival 2019.